Firstly I would like register a UFO 34 with you.
Yacht Name:Shadow
Owner: Simon Morgan
Home Port: Barry/Barry Yacht Club

Also looking for some advice re spinnaker setup. Shadow is equipped with a babystay and has a slide and spinnaker car on the mast. Due to the babystay we can't do a dip pole jibe so we end-to-end. This can be a bit of a handful when there's any significant amount of wind about and is really a two man job.We're thinking of going to a 2 pole setup and wonder whether anybody has done this themselves and can offer any advice.Would also be interested to hear how other people setup the jockey pole. We clip to ring on side of mast then tie to shroud, should we also be limiting upward movement perhaps tie to toerail???Any advice would be appreciated.
Posted by Adrian at 1:46 PM 1 comment: 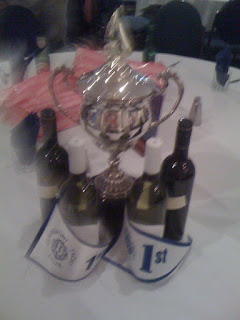 The ½ ton cup is held each year by Claremont & Hillarys Yacht clubs. It consist of 2 offshore races. The 1st race is from Fremantle up to Hillarys (Mariners Cup for Div 1and the ½ ton cup for Div 2). The race back on Sunday is the Shepherdess Cup. 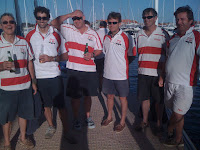 The events date back to the early 1970’s, and were inaugurated by Alan Bond. He needed to have a yachting regatta to qualify for sending a 12m challenge to Rhode Island. This eventually led to him winning the Cup in 1983.

But Saturday was our moment of glory, and
we were somewhat weary on Sunday.
We also beat all the Div 1 boats on IRC. 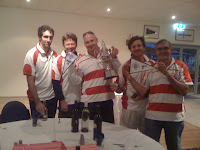 Hughie was not kind for the return race, and we could not win the double.


Best Regards
Bryan
Olfrygt RF184
Posted by iPoods at 10:21 AM No comments: