Dear UFO 34 sailors all over the world,

Richard Brabazon emailed to tell me that the link from renegaders.co.uk was not working. Well, I have fixed it, so send in your news and pictures.

Posted by Adrian at 6:36 PM No comments:

My apologies for any interruption to service on www.renegaders.co.uk. This is because I have moved the domain to a new service provider and I have some fine tuning to do.

But, don’t let this stop you from sharing your news with the other UFO 34 owners.

Posted by Adrian at 1:22 AM No comments:

I am just completing the purchase of Westerner III and hope to be moving her to the in the next few weeks. The rudder bearings have a lot of free play and need replacing. Does anyone have any experience of doing this job? Any advice or information would be greatly appreciated.

Posted by Adrian at 7:21 AM No comments:

The Barley Mow, Bonsall Ok Ok if these are not the sort of UFOs you were looking for hit this linkto Britain's UFO capital.
Posted by Adrian at 8:03 PM No comments:

brian rainey | ufo 34 prototypeFollow the link to see pictures of the restored UFO2.
Posted by Adrian at 1:57 PM 1 comment:

Andy Morris posted this response. I have moved it here so that you can respond more easily.

(Andy, thank you for this. Send your email address, in confidence, to enquiries@renegaders.co.uk if you would like to join the list of contributors to this site.)

If anyone would like any info on UFO's, the design, history or info on any particular individual yachts, , esp the 34 and 27, please contact me via here as I have known and followed most of them over the years and have owned 2 UFOs and sailed on a great many.
Regards to all owners of interplanetery craft..
Andy Morris

Where are they now?

Hi, I used to own a UFO 34, a great boat, called 'Myfoe', now at Glasson Dock, and owned by Richard Brakewell.

'Knight Templar'- was at Fleetwood

'Branwen of allaw'-Holyhead, now not known where now

I have many more that I am tryong to extract from memory,  Iwill let you know!

early ones after the original prototype, were built by Ardleigh plastics, and did not have the Holman & Pye 'stripe' on the hull. 1975-1978/9. Later ones were moulded by Colvic, with a stripe and most had treadmaster decks. All had either a Yanmar YSE 12 HP, or a British Leyland big 35HP Diesel.Sme moulds were sold to a company called hazelwood Yachts and were fitted out as Hazelwood 34, with an extra window in the coach roof and a seperate aft cabin and u shaped saloon and table, although these versions are exceedingly rare.

I still know the whereabouts of an uncompleted hull, although it has no deck, and a rather ugly high wooden homebuilt superstructure!!

If you'd like any more info on these boats or want to ask me anything, please do. I also owned a UFO 27. There were fleets of both 27's and 34's at Holyhead in the 80's and many people here have experience of sailing them.

I have just found your website on the internet. Our family boat is a UFO 34
Foxclouds and she is based in Plymouth usually on the moorings just inside
Mountbatten Breakwater.

The boat has sailed us extensively around the South West (including the
Isles of Scilly) and over to both Northern and Southern Brittany with our
three children Oliver (17), Rebecca (15) & Hannah (10) for the past 7 or 8
years.

She used to belong to my wife's father (Paul Harrison) and he had her based
on the River Weaver (up the Manchester Ship Canal) in the winter and then
in Holyhead for Spring and Autumn. During the Summer she sailed around the
Western Isles of Scotland and was based in Kerrera Sound near Oban.

We have just started to race her again here in Plymouth Sound but our
skills need some improvement to better last place (but we have a lot of
fun!).

Sally's brothers John and Simon (Harrison) have also taken the boat in
Scotland and on a couple of trips to Ireland for Cork Week. They have
performed rather better than we have.

This year (2004) John took his family and friends along the South West
Coast to the Isles of Scilly (one of our favourites) and back via Fowey and
Falmouth.

I work at sea and would be happy to talk to other
owners or prospective owners.

Thank you for managing the web site. It was great to come across it tonight
while bouncing up and down in the North Sea.

I was recently chatting to someone who used to crew on Brandybottle when she was raced on the East coast. ( I think). He told me that the original skipper came from and that brandybottle is the local name for the yellow water lily that grows on the Norfolk Broads, hence the name.

Posted by Adrian at 7:55 PM No comments:

Welcome to Filipe AssunÃ§Ã£o and Julio Nobrega, who are the new owners of Jackpot. She’s based at Funchal, . For those in the southern hemisphere, it’s a Portuguese island in the famous for its benign climate and wine. Filipe invites passing UFO 34 sailors to make contact and you will find his email address on the UFO 34 list (there’s a link somewhere on this page).

Bit of a long way to . I wonder whether Ryanair goes there?

Posted by Adrian at 7:25 PM No comments:

I am thinking of buying a used UFO 34 (excellent condition), and I wanted to know how easy will be to change the tiller to wheel steering. Also from your experience could this job been done while the boat is on the water? Do you know who can supply the wheel and all needed accessories.

Many Thanks and Regards,

Posted by Adrian at 6:04 PM No comments: 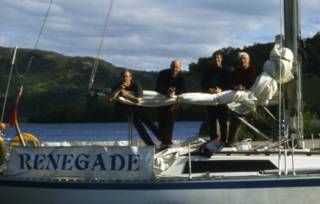 Posted by Adrian at 4:20 PM No comments: 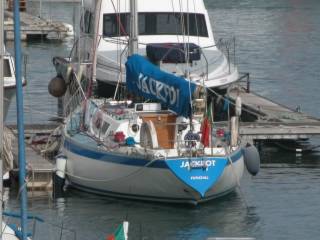 Posted by Adrian at 5:39 PM No comments:

Looking for "Into the Sun"

Myself and my family fitted out a 34' UFO hull in the late seventies and named it "Into The Sun".

It was quite distinctive - White hull with a red stripe, a sun was painted on the stern by a friend of the family.

My parents sold the boat on some years ago now and have owned several others since.

We'd love to find out what has become of the boat if anyone has seen it anywhere or knows of it's whereabouts.

I can try to post some photos if that would help.

Please assist in our quest if at all possible. 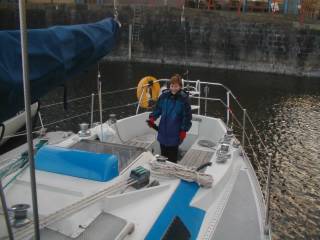 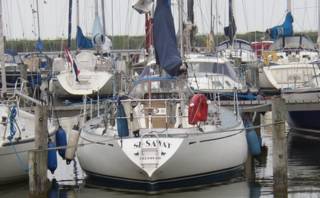 Si-Sawat. Jaap says it's a kind of lucky cat in Thailand.

Posted by Adrian at 4:15 PM No comments: 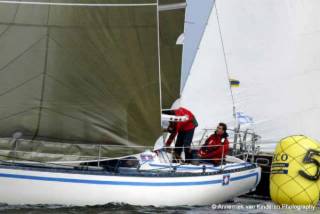 Well that’s the name of Jaap Been’s UFO 34, but what does it mean? 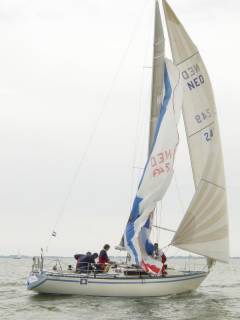 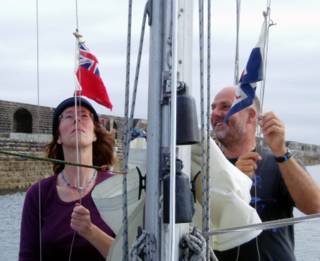 Put the flags out!

Now you can post your news directly where everyone can see it. Send in your tall tales of the sea, which your families have heard too many times before; we are waiting for them.

You can send photos too.