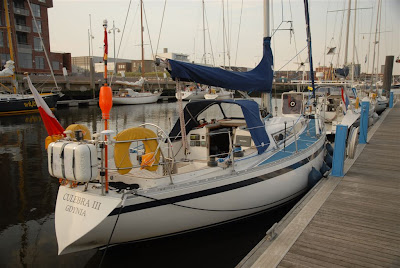 Dear Adrian,
I have just decided. Culebra is going south – to Med. It has been very difficult decision for me. I have spent all my sailing life on Baltic Sea and North Sea. But this year I have been defeated by North Sea weather. In spring we started with my co-skipper from Lemmer (The Netherlands) and visited Ramsgate, Queenborough and London and all the time it was raining and forecast 6-7 occasionally 8. And it was true forecast. During summer holidays we were planning to sail from Lemmer to Chanel Islands and came back to the Netherlands but instead of sailing we spent over a week in Scheveningen waiting for winds other than south west 7-8. When the gales finished the rains begun. As usually. So I was able to achieve only Dunkerque and in raining July morning decided to go south.

Do you know about any UFO 34 which has sailed through French canals to Med ? Official draught of canals is 1,8 m. In theory (according to drawings) draught of UFO 34 is 1,83 m , but my Culebra has 1,95 – I took her on land in Dunkerque and measured. I will start from Dunkerque and try to dig up through canals but probably I will have to execute beck up option - means lorry option. So I am prepared for loading my boat on the lorry in Pont-l’Eveque (60400 France) or Montereau-Fault-Yonne (71130 France) and transport her by land to Chalon-Sur-Saone (71100 France) - through the shallowest part of French canals. Lorry option is not the cheapest one but I have no time for sailing around Europe. If you know anybody who has executed this way by UFO 34 please let me know. If not I will tell you in October if it was possible for UFO to sail all the way through French canals or lorry option through the shallowest canals was necessary.